If Super Mario was real, then Cordyceps militaris would be his power-up mushroom.

Seriously. Many people believe this mushroom is the secret hack that fuels Chinese athletes into breaking world records. (Besides vigorous training for decades, of course.)

But does Cordyceps really work? How can you benefit from its power? Is it safe to take?

Let's dig into the matter.

Cordyceps Militaris
What Is Cordyceps?
A Supplement Overview
Perks on Physical Performance
Increases VO2 Max
Slows Down Fatigue
Boosts ATP Production
Other Benefits to Keep in Mind
All About Proper Dosage
A New, Promising Option 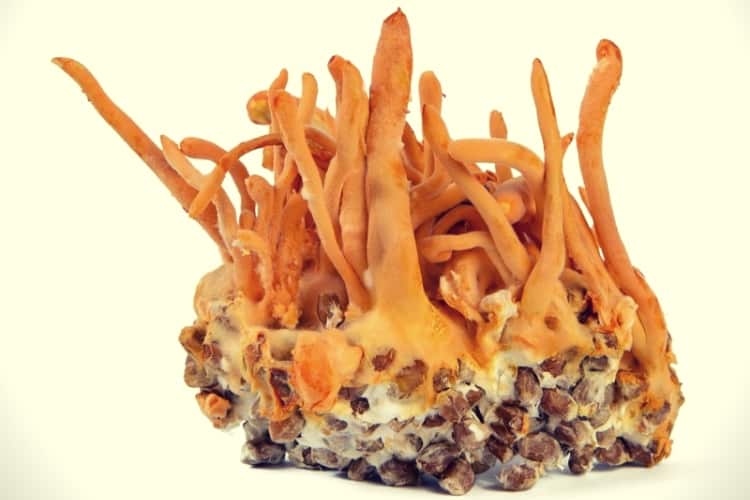 What Is Cordyceps Militaris?

Well, Cordyceps doesn’t really look like the edible mushrooms you see in the grocery store. After all, it's a type of fungi that grows on insect larvae. Kind of brutal, right?

The remains of both the fungi and the insect are collected, dried, and mixed up. Then, the blend is used to treat kidney disease, fatigue, low sex drive, and other health issues.

Now, there’s a growing belief that this parasitic mushroom may just be the key to improving performance—from the gym to the bed!

Although Cordyceps has been used in traditional Chinese medicine for centuries, accessibility remains a problem. That’s why supplement companies have come up with a more viable option, the Cordyceps extract.

Cordyceps extract is now the primary ingredient of many health products on the market, promising everything from general well-being to becoming the super-athlete you’ve always wanted to be.

However, getting the most from this supplement isn’t as simple as grabbing the first bottle you find. It’s necessary to look for something that’s synonymous with quality. 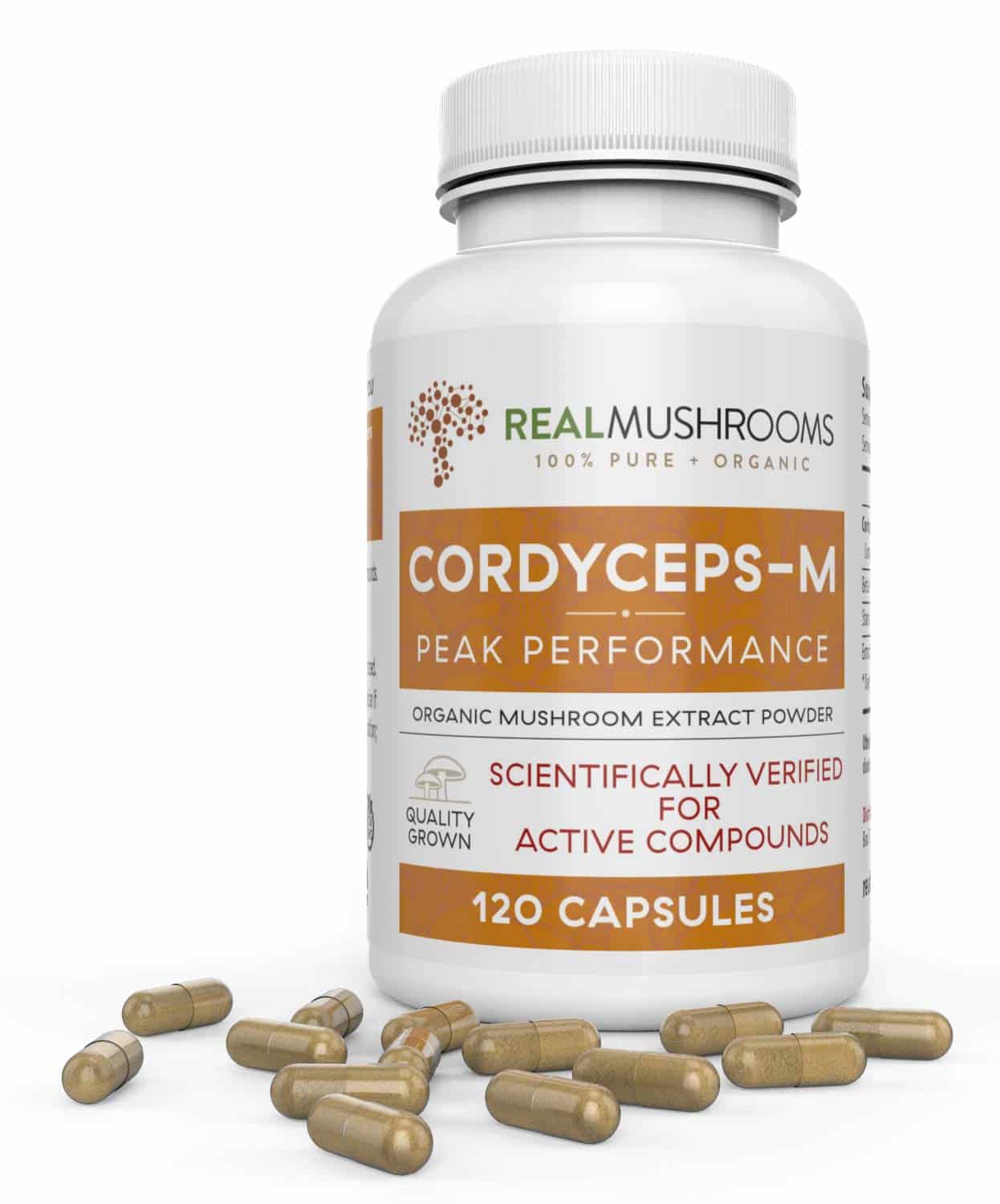 Look for a supplement with 100% Cordyceps mushroom, meaning zero additives like grains, starch, mycelium, or other fillers.

The cultivated and collected mushrooms should undergo hot water extraction to ensure that all the beneficial cordycepin and beta-glucan compounds are extracted. As a pleasant bonus, you'll get all the other nutrients from the mushrooms too.

Sadly, most supplements on the market aren't extracted from 100% Cordyceps mushroom. The main reason is that authentic Cordyceps is difficult to gather and really expensive. In other words, most products out there are just made from myceliated grain. Not terrible, but not fabulous either.

So, whenever possible, opt for a pure Cordyceps product if you want all the potential health benefits.

Which brings us to the exciting part of this whole Cordyceps story.

More than 400 types of Cordyceps have been discovered so far, but only two have caught the interest of health research—Cordyceps militaris and Cordyceps sinensis.

For this section, we’re going to focus on just Cordyceps militaris.

So, what are its benefits for physical performance?

Studies show that the use of Cordyceps supplements helps improve physical performance by increasing VO2 max. However, keep in mind that elite athletes might need a higher dose to get the desired results.

For example, one study published in 2015 reported that Cordyceps may have a positive effect during strenuous exercise by delaying the onset of fatigue. This means a lot to those who are into endurance sports like long-distance running.

Although we need more clinical trials, this one has established the very potential of Cordyceps militaris, which is a good start already.

Adenosine triphosphate (ATP) is the primary carrier of energy in all living organisms.

Essentially, an increase in ATP levels means a significant boost in performance since muscle tissues will receive a better supply of energy.

Combine that with a boost in VO2 max and enhanced resistance to fatigue, and the result is an effective formula for optimal physical performance.

Other Benefits to Keep in Mind

Of course, the perks of Cordyceps aren’t limited to physical performance. Here are some other benefits associated with this mushroom and yes, medical studies are discovering even more: 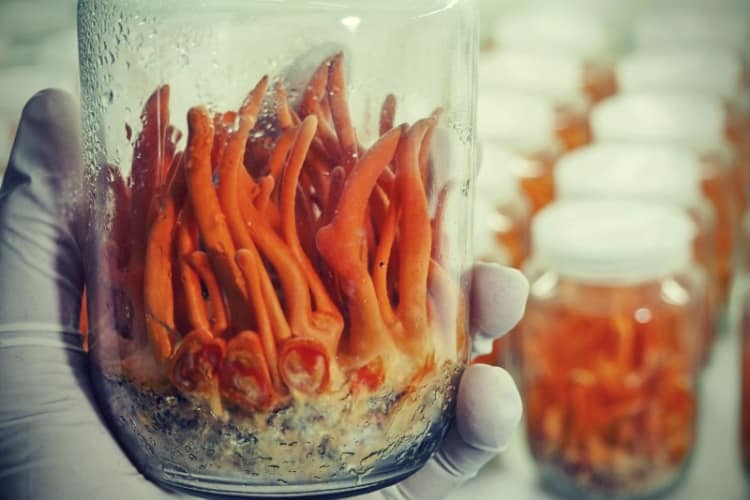 All About Proper Dosage

Most Cordyceps extract supplements come in capsules, which contain the elements of the mushroom in powdered form. As a rule, each capsule comes with about 500 milligrams of the extract.

For men who just want to increase their physical performance, a dosage of 1,000 milligrams per day should be enough. However, elite athletes who want to boost their energy levels even higher may need a larger dose.

Just to be on the safe side though, be sure to talk to your doctor before taking Cordyceps.

Well, every person is unique. Therefore, it's impossible to predict how someone will react to an exotic natural supplement.

For example, Cordyceps may trigger rare side effects depending on different factors, and your doctor should be aware of that. Last but not least, there’s a minor possibility that Cordyceps could interact with the medications you are taking right now.

Just to be clear, most people tolerate Cordyceps well, with little to no side effects at all. Still, chatting with your doctor is always a wise idea before trying a new supplement.

Cordyceps militaris has been a popular component in traditional Eastern healing doctrines for centuries already. Now, scientific studies report about its effectiveness too. There’s some evidence that Cordyceps could boost physical performance and delay fatigue. The best part? It’s finally available in a more accessible form, the convenient Cordyceps extract.