​While China might be the largest market in the world for Ginseng, Korea is known to produce the finest Ginseng in the world. In this article, we will be taking a closer look at a newly developed, cutting-edge variety of Ginseng, called Korean Black Ginseng.

Among herbal supplements, Ginseng (Panax Ginseng, not to be confused with Siberian Ginseng which is a different plant) has stood the test of time with over 2000 years of use in Traditional Chinese Medicine (TCM).

Believed in TCM to be warming and to restore Qi (life force), Wild Ginseng tea has always been one of the most popular herbs used for stress adaption, to regain health after disease and to increase energy.

Modern research has now shown that Ginseng root contains steroid saponins called ginsenosides, which are responsible for its vast array of pharmacological effects.

The Difference Between White, Red and Black Ginseng

Ginseng root is primarily grown in Asia (aka Asian Ginseng), which is the root which White, Red, as well as Black Ginseng, is made from.

There is also American Ginseng root (Panax Quinquefolius) which can be found growing wild in North America, but this variety is mostly used for women's health since it is more cooling to the body.

White Ginseng is the most common variety which is basically the neutral form of the root as soon as it is harvested directly from the ground. This type is also more cooling (but not as cooling as American Ginseng) and the preferred form for use by women. 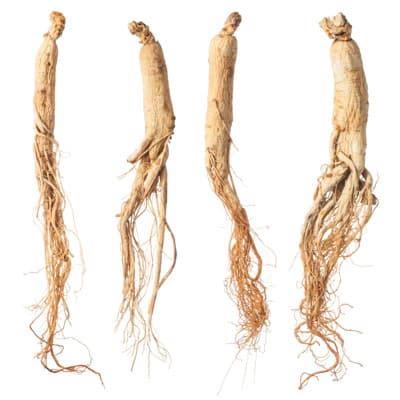 ​Red Ginseng is White Ginseng that is steamed once to increase it’s warming properties by increasing the levels of some specific ginsenosides by subjecting the root to heat.

Red Ginseng is considered more Yang (warming, masculine) and is especially beneficial for men since its effects on hormones and sexual function are stronger than White Ginseng.

It is well known in TCM that cooking increases the bioavailability of the constituents of some herbs. This is why some herbs are steamed, boiled or extracted with alcohol before consumption.

Black Ginseng is a new variety cultivated in the region of Geumsan in South Korea, which has an ideal climate and mountain conditions for growing Korean Ginseng. A unique patented method of preparing the fresh Ginseng is what makes it into the Black variety. 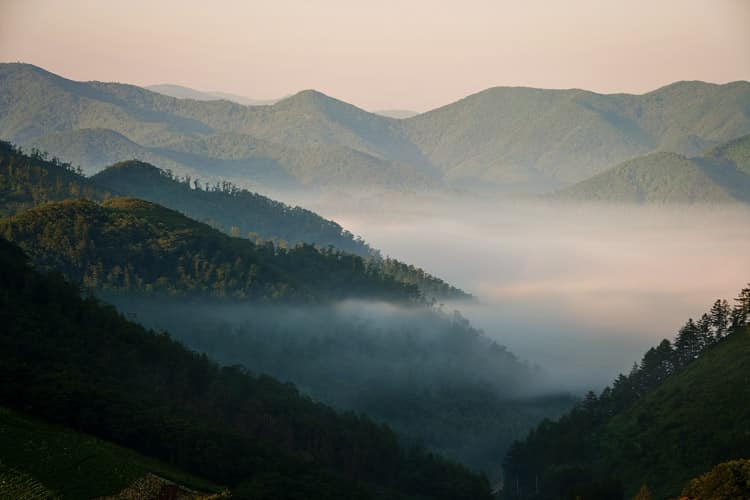 ​Compared to Korean Red Ginseng, Black Ginseng is steamed up to 9 times which significantly increase the levels of some specific ginsenosides even further. 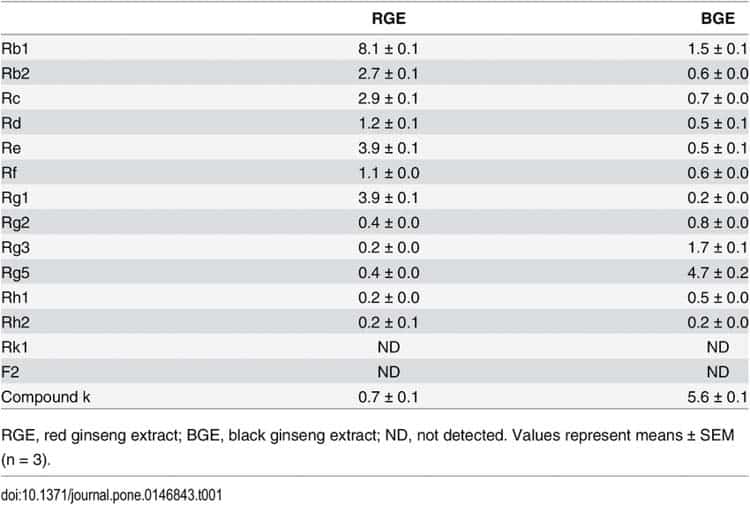 Why Black Ginseng Is Superior for Men

​Black Ginseng contains a much higher degree of the ginsenosides Rg3, Rg5, and Rk1.

Rk1 and Rg5 are both implicated in increasing mental performance, brain circulation as well as memory. This also makes it an excellent natural treatment for Alzheimer's disease.

Rk1 has also shown unique properties for blocking vascular leakage as well as prevent hepatoxicity from drugs such as paracetamol.

The higher levels of Rg3 however, is the most exciting ginsenoside for men since it's involved in improving sexual function, increasing libido and promote hormone production.

Rg3 also promotes the testicles to secrete testosterone in times of stress when testosterone levels might otherwise be reduced, essentially restoring healthy testicular function, sperm production, and stamina even in aging men.

All in all, Black Ginseng is one of the best supplements for men's health since it increases your intellectual abilities as well as makes you a stud in bed.

Further, other benefits of ginseng are well known such as its ability to reduce anxiety and hangover symptoms as well as increase the detoxification rate of alcohol. What more could you wish for?!

Grab some Ginseng before heading out for your next weekend bender, and we guarantee you will have a much better time both during, as well as the morning after!

​The following is an assortment of benefits shown from rat and human studies, as well as
double-blind placebo-controlled studies explicitly made on Black Ginseng: 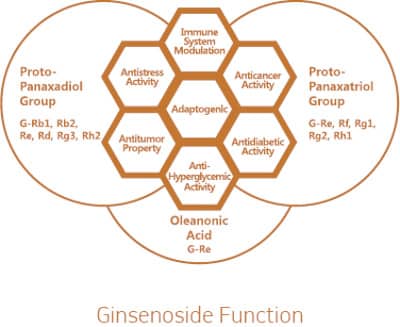 ​While Ginseng is usually well tolerated and free of side effects, there are some things you should be aware of:

​It is often said in the West that Ginseng is a stimulant and hence should not be taken before bed. This is far from the truth and stems from Westerners inability to understand herbal medicine and like to view everything in the context of being one-directional (similar to pharmaceuticals).

​Ginseng belongs to the adaptogen class of herbs which can be both stimulating as well as relaxing depending on the needs of the organism consuming it.

​In fact, consuming Red Ginseng extract before bed has been shown to improve sleep in research.

If you combine Ginseng with caffeine in too large amounts, there is the possibility that some people might experience excess stimulation. This is not a side effect rather that Ginseng actually makes the effects of caffeine more potent, so you might find yourself easier overdosing on caffeine.

Caffeine is known to increase the levels of protective hormones which is probably responsible for its stimulating effects (neurosteroids such as Pregnenolone and Progesterone).

​It is likely that since ginsenosides in Ginseng are structurally similar to these hormones, they act as mimetics, which is how they can make up for reduced levels during disease and improve its symptoms. Caffeine in combination with Ginseng can hence increase these levels too high if overdosed causing potential overstimulation. 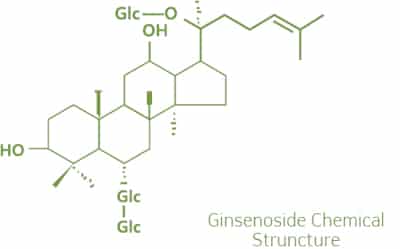 ​When using Ginseng in combination with caffeine, start small and work your way up. Coffee is one of the most popular drinks in Korea and Ginseng is often combined with it to such a degree that even Red Ginseng Coffee is sold in cafes.

So don’t worry, just take it slow and you will be able to reap the amazing benefits of both caffeine as well as Ginseng.

​Ginseng shares the same beneficial effects on blood thinning and inflammation as popular NSAIDs such as Aspirin, by similarly inhibiting both COX-1 and COX-2.

Studies have shown the combination of low dose daily Aspirin (as used for preventing heart attacks) and Ginseng to be safe.

However, If you are using higher dosages of Aspirin then that we suggest you discuss it with your doctor before consuming any Ginseng. Taking a Vitamin K supplement can help prevent excessive blood thinning effects. 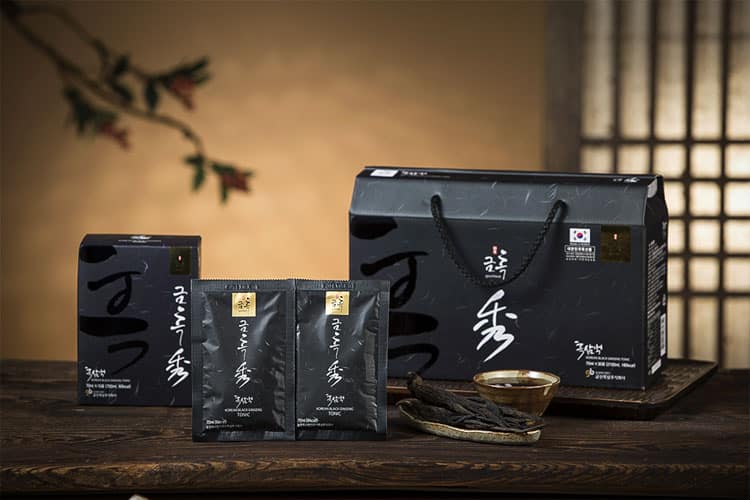 ​The Only Korean Black Ginseng We Recommend

​Black Ginseng powder is still very hard to find outside of Korea, but there are a few products available in the west which contains genuine Black Ginseng exported and certified by the Korean Government.

The following are two such Black Ginseng products (one 3 months liquid extract bottle and the other one contains 30 days of single-serving sachets) we have sampled these ourselves and they are the real deal and very potent. You can buy them on Amazon: 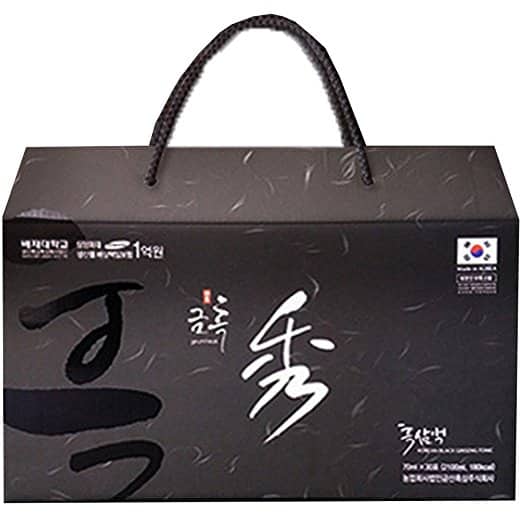 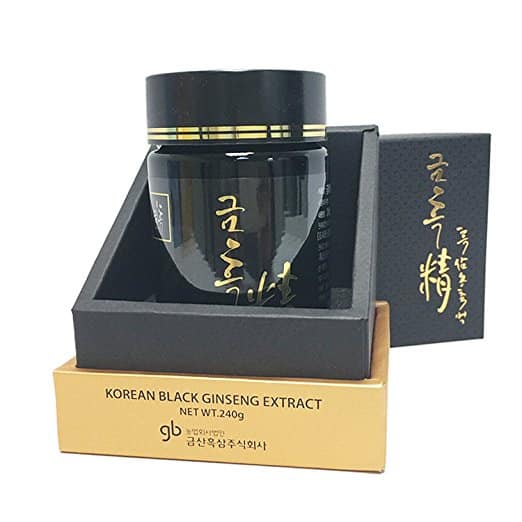 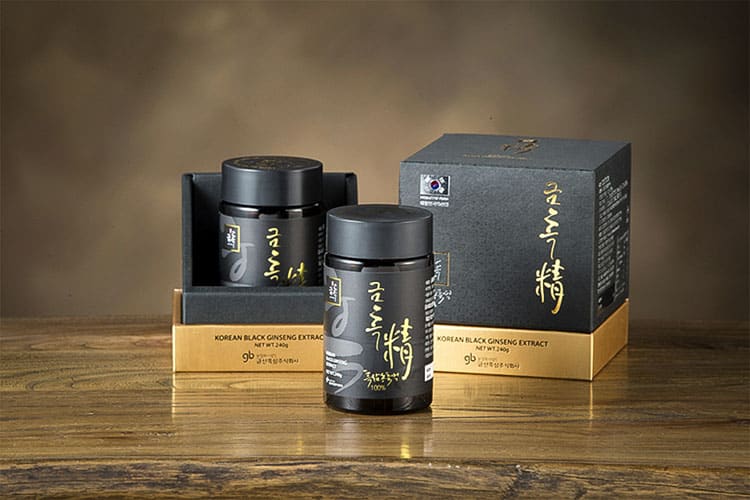 2 thoughts on “Korean Black Ginseng: The Most Effective Ginseng for Treating Erectile Dysfunction”