​Peptides bodybuilding is the latest craze in health and fitness, but contrary to popular belief, it is not some magical muscle building solution. It can work but it’s always important to find out what the real deal is.

​Peptides are amino acid chains -- compounds consisting of 2 or more amino acids linked together by a peptide bond.

​They are important for muscle mass because amino acids are the building blocks of protein. Peptides can comprise up to 50 amino acids. These amino acid chains can already be found in the human body, which is why peptide supplementation is deemed to be all-natural. So technically speaking, peptides are proteins with a much smaller molecular weight.

Peptides have multiple roles in the human body. This is because they function in a similar way to hormones and can therefore trigger certain effects. They can act as building blocks of muscle, as hormone precursors or hormones themselves, or as components of the immune system. Some of them can act as the insulin hormone.

​If used the right way, there is potential for peptides to become alternatives for potentially harmful substances such as anabolic steroids. In fact, there are now some people recommending peptides for therapeutic use.

​​Peptides can ​be used as a treatment for a number of health ailments. ​It can also hold the key to a healthy alternative for boosting your human growth hormone levels.

​What Are the Benefits of Using Peptides?

​Many bodybuilders have been recommending the use of peptides over other muscle-building supplements such as steroids. The benefits of these products are numerous and can give your health a much-needed boost.

Using the right hormones can be used as treatment for health problems such as hormonal imbalance.

​​With more HGH production due to peptide hormones, you can build and maintain lean muscle mass better.

Here are some of the benefits of using peptides as part of your supplementation plan.

​When combined with proper training, good nutrition, and the use of the right health supplements such as whey protein, peptides can give your muscle building efforts a huge boost.

​A number of peptides are now actively being used for bodybuilding purposes. A lot of these are HGH supplements, with most of them highly commended for their efficacy and relative safety.

Growth hormone releasing hormones (GHRHs) cause the body to secrete growth hormone. The secreting time can vary depending on factors such as peptide purity and saturation dose.

IGF-1 is a peptide that works in conjunction with GH. IGF-1 is related to insulin, and can actually enhance muscle build-up and recovery by enhancing nutrient uptake by tissues.

Mucuna pruriens is one example of a natural source of bodybuilding peptides. This supplement is more than just a testosterone booster, but it also boosts the level of other essential hormones such as dopamine. 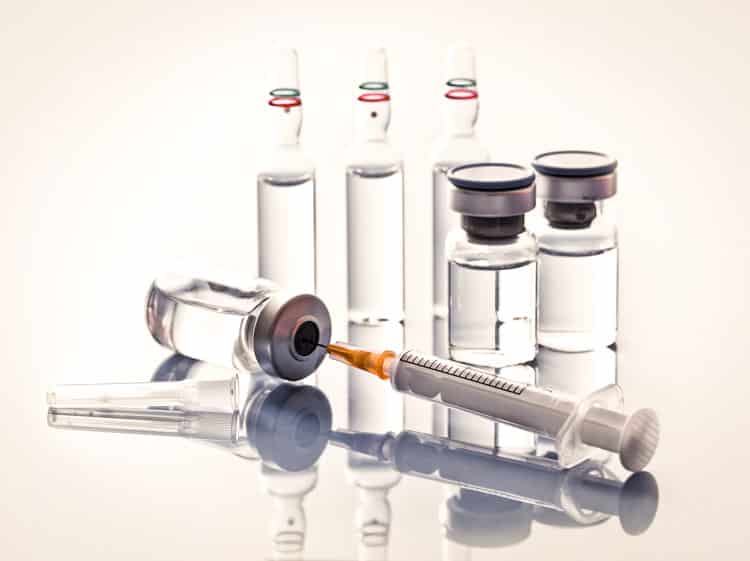 For intramuscular peptide injections, the ideal site is where the musculature is most lean, with minimal skin and fat layers.

​How Are Peptides Administered?

​The most common way of administration for peptides is via a subcutaneous or intramuscular injection. When administered, its effect is almost instantaneous.

Preparing peptide injections depends on the formulation of the product you’re using. Generally, it involves mixing an instructed amount of peptide powder with bacteriostatic water to create a reconstituted peptide solution.

An insulin syringe is used for injecting the prepared peptide solution via either subcutaneous or intramuscular route. For intramuscular injections, the ideal site is where the musculature is most lean, with minimal skin and fat layers.

You can actually mix 2 different peptides in the same syringe. This can help reduce the amount of injections you should take for each treatment round.

It is important that you follow safe practices when using any kind of syringe to prevent infections. Never reuse syringes and never share syringes with others.

​Peptides can also be ingested in the form of bovine colostrum supplements.

​How to Store Peptides

​Non-reconstituted peptides can be stored in a refrigerator or in a cool place away from sunlight. This is because high temperature and exposed light can damage peptides.

​Are There Any Health Risks Involved?

​Just like with anything that entails introducing something to your body, you may experience side effects. These can range from minor to potentially life-threatening.

You should stop treatment immediately if you experienced dramatic weight loss or gain. If you observe joint pains, increased blood pressure, or any evidence of organ dysfunction, discontinue immediately and consult your physician.

An additional note must be mentioned about the possibility of infections due to irresponsible needle use. Syringes must be used, handle, and disposed properly to reduce the risk of injection site infections, blood infections, or even HIV.

​If used the right way, peptides bodybuilding can take your physique and performance to the next level.

Peptides Bodybuilding Guide: Benefits, Safety, Misconceptions & How to Use