Even if you’re really into bodybuilding, it’s almost impossible to eat right all the time – there’s always that chance that you’ll end up relying on fast food, especially when you’re on the road. Well, there’s actually such a thing as bodybuilding fast food.

No, we’re not telling you that fast food chains have these secret menus specifically developed for bodybuilders. You’ll simply be choosing something that won’t ruin your diet (and, in the long run, your physique) by going for a low calorie, high protein dish.

To help you out in making the right choices, we’ve prepared a list of fast food items that fit the bill.

Bodybuilding Fast Food is all about making healthier decisions when you're on-the-go or simply don't have access to quality food. It's about choosing better options for your diet and getting your macros, without ruining your muscle-building efforts.

Finding something below the 500-calorie mark in this fast food chain is a bit difficult – but it is possible. If you’re not looking for a dish that’s too filling, you might as well pick the Artisan Grilled Chicken Sandwich – it only comes with 380 calories but still manages to contain 37 grams of protein. 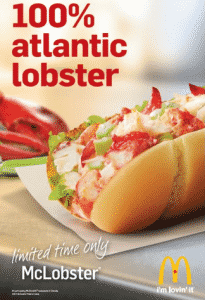 The Lobster Roll is an even lighter alternative. It’ll give you 24 grams of protein without going past the 300-calorie mark (although it does have five grams of fat, which you’ll have to consider as you make eating adjustments).

Avoid anything that’s served with sweet sauce or has bacon in it. While there’s a big chance that you’ll be getting a lot more protein from those menu items, you’ll also be gaining loads of calories – you don’t want to stuff yourself with carb- or fat-heavy meals. 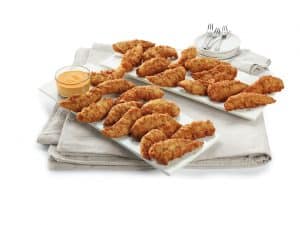 Grilled Chicken Nuggets are hard to beat if you’re specifically looking a fast food dish that will fit almost any bodybuilding diet. A single serving of it will get you 23 grams of the muscle-building macronutrient – and despite that, it only has a total of 140 calories.

Chick-n-Strips is another good option. It’s more filling than Grilled Chicken Nuggets (having 360 calories) and it has more protein as well (34 grams) – but the downside here is that it has more than double the sodium (1230 milligrams per serving).

Choosing doesn’t have to be too difficult though, especially if you’re open to something that sits between the two in nutritive value. Chick-fil-A’s Chargrilled Chicken Sandwich will provide you with 29 grams of protein and has 290 calories.

This fast food restaurant’s regular menu doesn’t have much to offer if you’re looking for high protein offerings that won’t fill you up with calories. Still, you could go for their Roast Turkey Farmhouse Salad (230 calories, 22 grams protein) if you’re left without any other option. 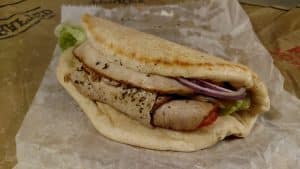 The Classic Roast Beef is another suitable pick if you have a bit more room for carbs (37 grams) and fat (14 grams) – or if your current diet’s not that strict to begin with. This dish will supply you with 360 calories, while also giving you 23 grams of protein.

It’s practically guaranteed that you’ll be tempted to go for Arby’s Triple Thick and Half Pound specials. While these massive meals (averaging at about 700 calories) do come with more protein, the amount you’ll get isn’t that far from what you’ll be getting from a serving of Classic Roast beef.

Try to avoid all things fried. If possible, go for grilled or baked products as they boast the least amount of calories and don't contain unhealthy fats. 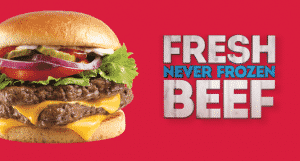 Choosing among Wendy’s offerings isn’t hard since to avoid their more sinful meals, you’ll only have to look for one word – grilled. Their Ultimate Chicken Grill Sandwich, for example, has 33 grams of protein and it’s below the 400-calorie range.

Actually, their Grilled Chicken Sandwich is a bit better. This particular dish will give you 360 calories but comes loaded with 35 grams of protein (the fat content is roughly the same for both sandwiches, though the non-ultimate variant doesn’t have as much carbs).

If you need something even lighter, you might have to pick the Grilled Chicken Wrap (you’ll find this one on the kids’ menu). With just 260 calories, it’s easier to fit in your diet but it doesn’t have as much protein as the sandwiches.

This iconic sandwich shop also has a few good choices for the bodybuilding crowd. Their Six-inch Subway Club is at 310 calories and provides 23 grams of protein – and it’s made so much better by the fact that it only contains five grams of fat.

If you’re looking for something similar nutrition-wise but entirely different in flavor, you might want to consider getting the Sweet Onion Chicken Teriyaki. You’ll get 380 calories and 26 grams of protein from a six-inch serving of that particular sandwich.

Going lower on the caloric scale is easy since the restaurant chain offers Mini Subs – and yes, they’re primarily marketed towards kids. Their Black Forest Ham Mini Sub, for example, only has 180 calories but still manages to provide 10 grams of the muscle-building macronutrient.

Surely, these aren’t the only fast food chains that offer solid options. Instead of always searching for lists like what we have here (or checking nutrition info while you’re already on the counter), you could just follow a few basic principles in making the right dietary choices.

As much as possible, you shouldn’t go for anything fried – aside from being mostly high calorie, those fried menu items will load you up with unhealthy fats. You should also avoid meals that come with dips and sauces for the same reason.

If everything on the menu is unfamiliar, you should simply search for things that are grilled or baked. Those are typically on the lower end of the fat-content spectrum, and they’re often marketed towards everyone who’s conscious about their caloric intake.

You’ll eventually realize how unpredictable the fast food scene really is (loads of new healthy offerings end up on the menu, and older ones suddenly get scrapped). Therefore, it really is crucial that you know how to pinpoint bodybuilding fast food without relying on a fixed list all the time.

Bodybuilding Fast Food: The Best Options When There’s No Alternative