A Silicon Valley-based company claims that it has created the most convenient non-invasive hair treatment device that can be used at home – Theradome. Hair loss is no joke, which is why we decided to do this theradome review and tell you what we think about it.

Theradome comes in the form of a headgear, which aims to treat hair loss through laser phototherapy. It is also the name of the company that manufactured the device, although it is formally launched as the Theradome LH80 Pro or simply, Theradome laser helmet.

Tamim Hamid, the company founder and creator of Theradome Laser Helmet, is a former NASA scientist whose marketing narrative tells that he himself dealt with baldness or androgenic alopecia.

Armed with knowledge of the possible applications of laser light, and an engineer’s skills, he proceeded to create a laser light therapy device.

Here are the downsides to this device:

Purchase This Product on Amazon
Theradome Review
Theradome Review: Pros & Cons
Things We Liked
Things We Didn't Like
Theradome Features
What You Need to Know: FDA-Cleared Versus FDA-Approved Status
How Does Theradome Work?
Low Laser Light Therapy (LLLT) for Hair Loss Treatment: Does It Work?
Low-Level “Laser” Therapy Versus Low-Level “Light” Therapy
The Scientifically-Proven Effectiveness and Safety of LLLT
A Closer Look at Theradome Claims
The Verdict

The Theradome LH80 Pro contains 80 pure laser diodes that cover 90 square inches of the 110-square inch average scalp area. The wavelength of all these laser diodes is 678nm.

Here are the other features: 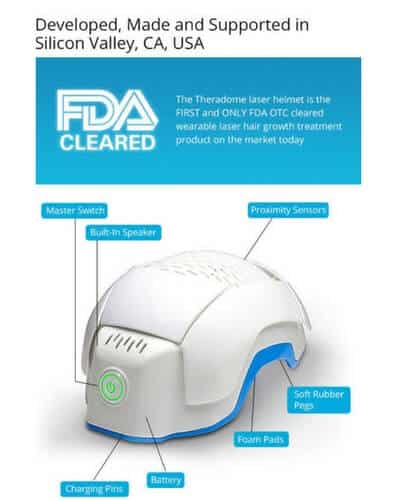 What You Need to Know: FDA-Cleared Versus FDA-Approved Status

Hair loss or hair thinning is no small matter. It can damage your self-esteem and ultimately harm your social life. That’s why many people sought to find a way to reverse the process.

As men and women age, hair thinning may occur. The hair follicles simply do not stay as healthy as they used to be. Not surprisingly, many people try to search for a way that can stop hair thinning, and maybe even regrow hair.

The demand resulted to the rise of many hair regrowth devices. The good news is, the US government regulates the food and drugs industry in the US, implementing strict standards.​

Theradome is hyped as an FDA cleared device. However, “FDA clearance” merely means that the device is substantially equivalent to another device offering the same use that is already legally marketed.

The “FDA approved” label is only for devices that have forwarded adequate proof of safety and effectiveness. In addition, the clearance status is only for use of women; the device has yet to acquire clearance for men’s use. 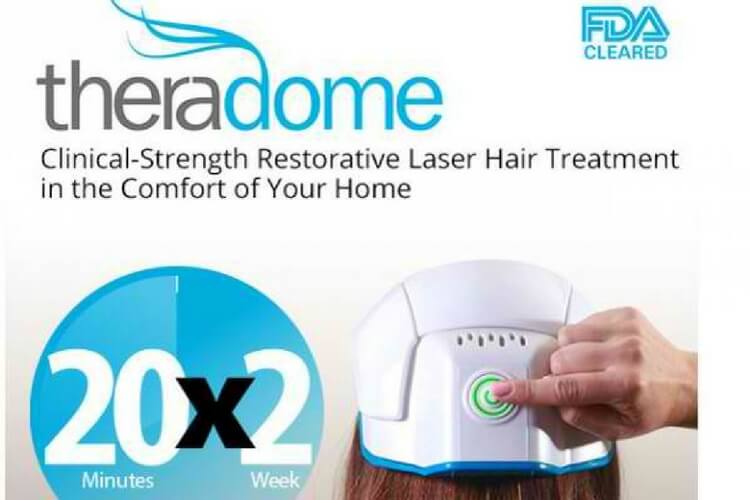 How Does Theradome Work?

The Theradome LH80 Pro must be worn on the head for at least 20 minutes twice a week. Theradome results such as new hair follicles, hair re-growth and less hair fall should be evident after a regular use of about 18 to 26 weeks.

The company claims that the Theradome LH Pro regenerates the follicles and causes hair growth by improving cell metabolism and protein synthesis in the scalp. With continued use, fuller and thicker hair may result within the prescribed time period.

The use of helmet for a laser light treatment of hair loss can be traced back to 2010, when TheradomeTM released its so-called “new generation” laser phototherapy home treatment. Other brands of the laser helmet technology such as Igrow and Hairmax followed course.

LLLT is believed to enhance blood flow in the scalp. As a result, it stimulates metabolism in follicles, resulting in the growth of anagen hair. Anagen refers to the active hair growth phase where the cells located at the hair roots divide rapidly, resulting in more and healthier hair.

Studies have already been conducted on the use of low-level laser therapy or LLLT on different human ailments and conditions. But not many of them concentrated on the effectiveness of laser or light therapy on hair loss, until just recently.

The evolution of low-level laser therapy originated from a serendipitous discovery made by Endre Mester, a Hungarian surgeon.

He attempted to test if ruby laser treatment can cause the growth of tumor cells by casting the laser light on the back of a shaved mouse. Expecting the laser energy would cause cancer, the mouse grew hair instead.

It turned out that the laser device he used was faulty because it did not emit enough light. He also found out that the low-powered laser light emission caused the mouse’s wounds to heal faster.​

Thus, the use of laser light in low amount is applied to the human body to heal wounds and relieve pain without burning the tissues. Only a low amount is needed because too much might cause permanent damage.

Near-infrared laser or hot laser therapy, which is used in surgery, must be distinguished from cold laser therapy or low-level laser therapy (LLLT). The former penetrates and repairs the tissue substantially while the latter is considered merely as a stimulant of cellular activities and functions.

Because the exact mechanism of how LLLT really works is still undetermined, the controversy that surrounds its use as alternative medicine still abounds.

Nevertheless, the scientific community agrees that sufficient amount of energy and wavelength in the application of cold laser light to the human body, or human scalp for this matter, is determinant of how efficient it is. 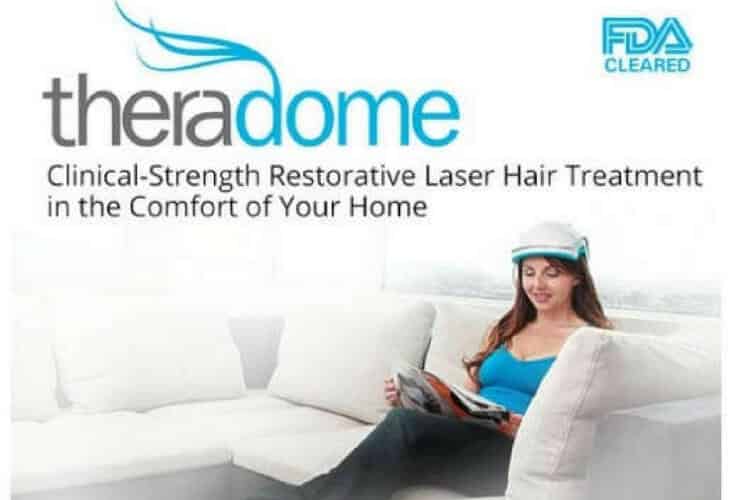 Laser phototherapy, as TheradomeTM calls it, is the same as photobiomodulation or cold laser treatment. These are different names, but in essence, they are all forms of LLLT.

An important distinction, however, must be made with regimens that use sources of light other than laser. The term low-level “light therapy” is appropriate for treatments that use other sources such as Light Emitting Diodes or LED.

The difference lies in the fact that laser light is much concentrated and powerful than LED light.

This does not mean, however, that a device may use only one type of light source. In fact, the laser helmets or “tophat 655 units” that were the subject of two c﻿linical trials in 2014 contain both laser diodes (21) and LEDs (31).​

In its website, the IGrow Company claims that the tophat 655 units used in these trials were IGrow laser helmets.

These laser helmets contain both laser diodes and LEDs. There was no reported side effects from the use of these laser devices.

The Scientifically-Proven Effectiveness and Safety of LLLT

During the 2014 trials, it was concluded that within 16 weeks, the LLLT of the scalp at 655nm showed a 37% increase of hair growth in men and women with androgenic alopecia.

Clinical trials using other laser products such as HairMax Laser Comb were also conducted. So far, there were no major adverse incidences or side effects reported from these findings.​

Remember what we mentioned above about how the medical community generally does not consider some of the clinical trials as reliable?

Well, a recently published 2016 scientific review evaluated all the studies available and discovered that out of these trials, most of them are randomized clinical trials (RCT).​

The result is that all these RCTs have moderate to high quality of evidence, therefore passing through the standards set forth by the Center of Evidence-Based Medicine, Oxford.

So what does this mean for the whole LLLT industry for hair loss treatment?

It means that all the available evidence on LLLT point to its safety and effectiveness for stimulating hair growth in both males and females who have proven to be unresponsive to other kinds of treatment.

A Closer Look at Theradome Claims

The discovery of low-powered laser light in the treatment of androgenic alopecia is nothing new. In fact, the Hairmax Laser Comb that came out in 2007 was the first FDA-approved product that uses LLLT for hair loss treatment.

What the Theradome laser helmet introduced is the notion of getting LLLT in the form of a conveniently hands-free headgear.

While it is true that much research has been put forth over the years on the medicinal value of the LLLT technology, the Theradome laser helmet itself is not.

The clinical strength results claimed from the research conducted is not solid. There has yet to be a study published in which a laser device containing pure laser diodes with 678-nm wavelength was used.

The most powerful laser energy level that was proven to be both safe and effective was from a device that emits light at 655-nm wavelength. Moreover, such device contains a combination of both laser and LED light.

For safety’s sake, it needs to be emphasized that the Theradome laser helmet contains a number of pure laser diodes because this amount and concentration may prove to be much too powerful. 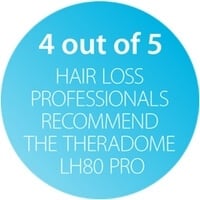 The bottom line is that, if you have 800 bucks to spare, you could go ahead and try the Theradome LH80 laser helmet.

But before you do so, keep in mind that the cause of one’s hair loss must first be diagnosed clinically. A laser hair therapy may not be effective at all if there is a health issue such as hyperthyroidism.

For best results, try to use hair vitamins, cleansers and hair supplements along with laser phototherapy. Supplemental scalp care products such as thickening shampoos will work synergistically to keep your re-grown hair follicles strong and thus prevent hair loss.

Minoxidil, a topical drug or in the form of shampoo, may also be used to address androgenic alopecia in both men and women.​

The fact that some people have success in restoring their hair back with Theradome’s laser helmet is no guarantee that this kind of treatment may work for you, too.

Every person’s makeup is different, and there are varying factors that may affect the device’s effectiveness. If you cannot commit to the regimen and the amount is way out of your price range, you should just save your money and try natural ways to stimulate hair growth. We can conclude this Theradome review with one advice – try it only if you can afford an $800 risk.