Hair loss is quite stressful for millions of men and women. While baldness and hair thinning is associated with middle-aged men, hair loss is actually a prevalent concern among many young men aged 20 and above. In this article, the efficacy of Rogaine hair regrowth treatment for man and woman will be examined. Does Rogaine work? How does minoxidil work?

Some people just have follicles that are more sensitive to androgens than other people. Their follicles react easily to the presence of testosterone, or DHT, causing some of their hair to fall out.

In men, follicles that are most genetically susceptible to excess hormones are often found at the front scalp and at the crown. Hair thinning typically starts from these parts until total hair loss spreads over the entire scalp.

The treatment methods for hair loss in the market are as varied as the types and causes of hair loss itself. To address this problem, one out of the following remedies, or a combination of them, is often employed:

Topical minoxidil is the most widely-administered form of treatment for androgenic hair loss.

While Rogaine is just a trade name of minoxidil, Rogaine is exceptionally popular such that people often interchange the two terms. Rogaine nowadays is the equivalent of minoxidil as much as Colgate is to toothpaste.

Minoxidil for hair loss is marketed under various brands, but Rogaine minoxidil is the only FDA-approved topical product for hair loss.​ 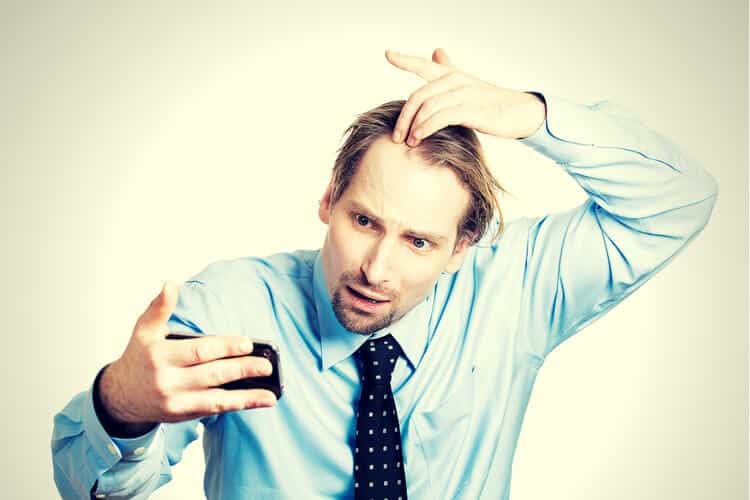 Rogaine is a topically-administered product for hair regrowth treatment. Minoxidil (generic name) is its active ingredient, with concentrations of either 2% or 5% extra strength.

Minoxidil was originally developed for hypertensive patients because it dilates the blood vessels and improves blood flow.

However, it was observed that several patients who took minoxidil for their high blood pressure, especially women, developed hypertrichosis. Also known as werewolf syndrome, hypertrichosis is an abnormal condition in which unwanted hair grows excessively over the body.

This notable side effect of minoxidil prompted some scientists to conduct a clinical trial on minoxidil as hair loss treatment. The minoxidil results were generally positive.

In 1988, the FDA approved topical minoxidil as a hair loss treatment for men with androgenic alopecia. Thus, the Rogaine minoxidil was born. 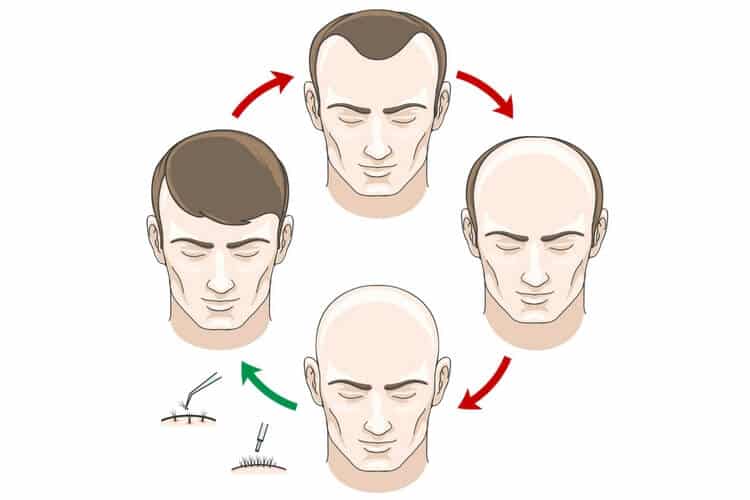 Like Rogaine, Propecia is the most popular trade name of finasteride for hair loss. However, it is an altogether different type of hair loss treatment because finasteride (Propecia) is taken orally.

While finasteride hair loss treatment works differently, its effects on thinning hair and shrunken follicles are the same as that of minoxidil results.

Unfortunately, women and children cannot use Propecia because it is exclusively for men with androgenic alopecia.

Does Propecia work? Yes. Deemed to be more powerful than minoxidil topical solution, Propecia targets the hormones that are believed to be responsible for hair loss: testosterone.

Propecia prevents the conversion of excess testosterones into DHT. Since it is a potent drug that is administered directly into the hormonal system, Propecia may cause adverse side effects that are probably greater than the effect of minoxidil for topical hair.​ 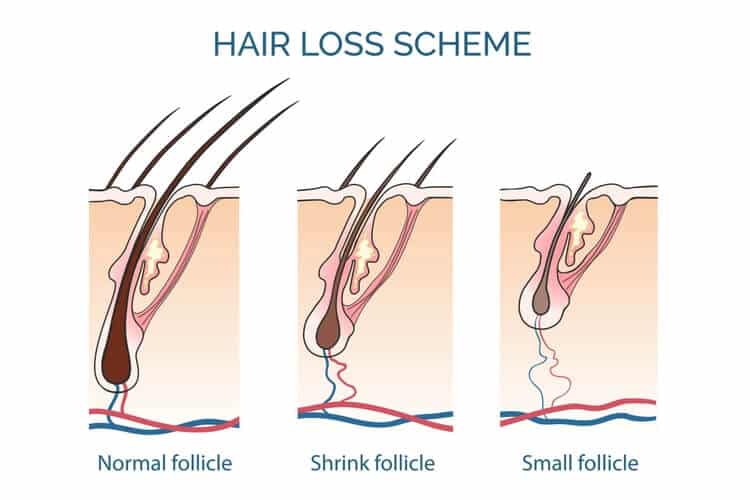 Mechanism of Action: How Does Rogaine Work?

The exact mechanism of how minoxidil works on the scalp in the promotion of hair growth is not really known. The theory that minoxidil increases blood flow to the follicles is likely but it is not fully established and understood.

From clinical trials and observations, however, this theory is enforced by the suggestion that minoxidil has something to do with potassium channel openers.​

Since minoxidil stimulates hair growth, the logical causation is that it acts directly on the cells of hair follicles. This, in turn, opens up the potassium channels that regulate and restrict the growth of hair.​

Frontal baldness or receding hairline may not be cured by minoxidil topical solution. In Rogaine for men reviews, however, the effects of minoxidil before and after were noted by some individuals who administered minoxidil topical on these areas.

Nevertheless, to apply Rogaine on the front scalp is not recommended because the clinical trials on this minoxidil were primarily tested on the top of the head only. It cannot stimulate growth on a completely bald area, nor can it reverse a receding hair line.

Rogaine minoxidil can work only on existent hair. It may thicken thin hair, but it cannot re-grow hair in areas where there are no hair follicles.

Further, some accounts of anecdotal evidence in Rogaine review forums may tell you that Rogaine foam can grow beard or facial hair. While it is convincing that it may work, to apply Rogaine anywhere other than the mid scalp is not advised.​

Procedure: How to Apply Rogaine

Rogaine’s topical minoxidil must be applied twice daily. This is true whether it is the minoxidil 5% or 2%.

Shedding of some amount of hair (telogen phase) may happen within two weeks of application. Don’t worry because this is an indication that the vasodilator effect of Rogaine minoxidil topical is actually working.

Usually, it is the thin hair and the weak ones that are let go. In the new growth phase (anagen phase), they will be replaced with thicker hair shafts.

Rogaine results in a clinical trial involving men with androgenic alopecia are more than positive. The Rogaine extra strength (minoxidil 5% solution) was found to be 45% more superior to the 2% concentration in terms of hair count and earliness of response.

Unfortunately, you have to apply the topical minoxidil indefinitely if you want to keep your re-grown hair. As proven in a study, your hair count and its thickness will return to the way it was before if you stop the minoxidil topical treatment.

Cost: How Much Is Rogaine?

Compared with other remedies for hair loss, hair regrowth treatment with topical minoxidil is one of the cheapest options. Wigs may cause $1000 to $2000, and you have to change them every year or two. Transplants may cause you $10,000 to $20,000.​

Rogaine’s over-the-counter products have been getting cheaper over time. What’s more is that you can actually save money by buying the ones that are sold at 12-months supply of Rogaine (Kirkland Signature) 5% minoxidil.

This package comes in two packs of 6-month supply of unscented topical solution, dispensable by a child-resistant dropper applicator. It costs just less than 60 dollars, which is the typical cost for a 2-month supply back then. 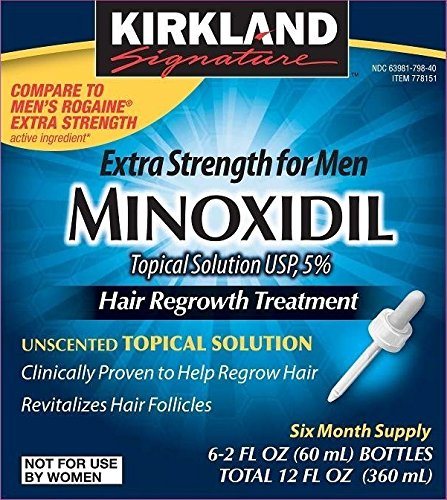 The ones that are dispensable in aerosol form (Rogaine foam), however, are not as inexpensive as the topical solution. It’s probably because the Rogaine foam is more convenient to use, and it dries out quickly on the scalp after application.

The topical aerosol – a newly released product line from Rogaine – is one of the bestseller in the hair re-growth department. It is available at a 3-month supply or 6-month supply of unscented minoxidil 5%.​ 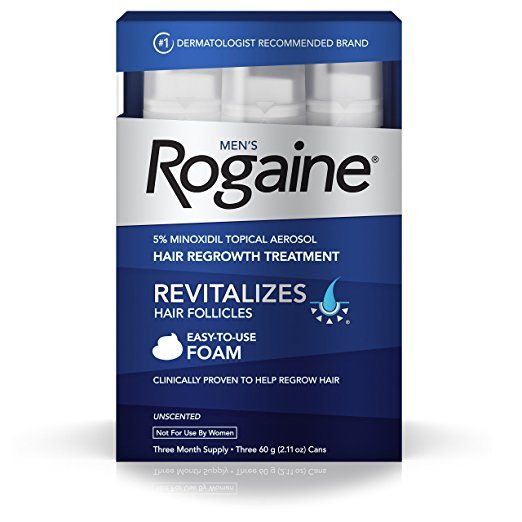 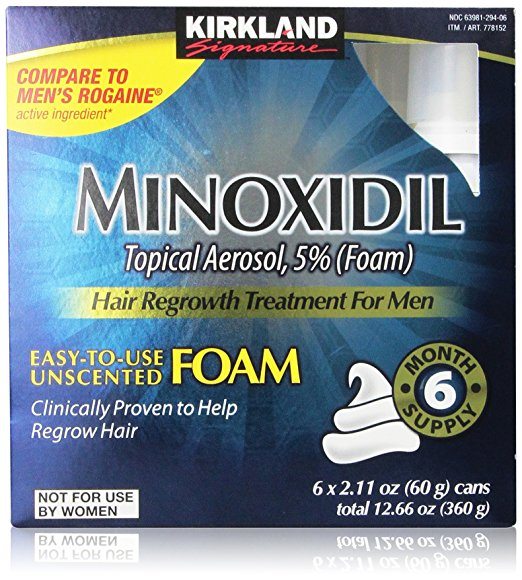 Another hair loss treatment worth mentioning is the combination of 2% minoxidil and herbal DHT blockers as a serum. This is a product outside of Rogaine’s brand, but believed to be no less effective.

DHTs (dihydrotestosterones) are sex steroids that miniaturize the hair follicles with its regulating mechanism. Usually found at the root of hair shafts, DHT plays the most part in many cases of androgenic alopecia in both men and women.

To some degree, DHTs are also influential in women with androgenic alopecia. But hair loss treatment with DHT blockers is generally not recommended for women because their case is also related to lack of oestrogen, which makes it much more complex.

DHT blockers promote hair regrowth by inhibiting the production of DHTs. Thus, the mechanism of action of naturally-occurring DHT blockers found in food extracts (e.g. saw palmetto) is the same as finasteride (Propecia).​

Duration: How Long Does It Take for Rogaine to Work?

While science and hair loss practitioners agree that Rogaine minoxidil does work wonders, visible results may come by slowly.

Rogaine claims that that minoxidil topical may work as early as 2 months, though results will be noticeable only after 4 months and onwards.

In most of the clinical trials conducted, the maximum amount of time was commonly preset at 48 weeks. Within this period, most of the Rogaine results – especially the minoxidil 5% – were already fully visible.

Therefore, you may conclude that Rogaine minoxidil is not working for you if you still feel there are no impressive results after the one-year period.​

Rogaine minoxidil is also an FDA-approved product for treatment of androgenic alopecia in women.

We’ve gotten used to the fact that hair loss problem is typically men’s thing. However, women also experience thinning hair, although they don’t generally lose their hair to the point of balding as some men do.

On its website, the company claims Rogaine for woman hair loss treatment – both the minoxidil 5% and 2% – can reactivate the dormant hair follicles. The reactivation increases the size of the follicles, allowing for the growth of thicker hair shaft.

How does Rogaine work for women is pretty much the same with how it does with men. Some shedding of weak and thin hair may also happen within the first two weeks.

In a clinical trial involving women with female pattern hair loss (FPHL), researchers found out that the minoxidil 5% topical solution works faster and more efficient in terms of hair count than the 2% topical solution.​

The minoxidil topical solution was applied twice daily for 48 weeks.

It was observed, however, that the 5% concentration caused higher incidence of side effects in women than the 2% solution such as the following:

Nevertheless, the two concentrations were well tolerated by both groups of women in the clinical trial without serious adverse effects. Hence, it goes without saying that these occurrences are not a cause for worry, as these are merely the typical side effects of minoxidil.

As gleaned from the discussion above, the treatment of hair loss with minoxidil topical has drawbacks of its own. To recap, the following factors may help you think over if treatment with Rogaine minoxidil is right for you:

While it is true that Rogaine results are scientifically proven and it is the only FDA-approved topical treatment for hair loss, this is not a guarantee that it will work for everyone. Minoxidil results may vary from person to person.