​I have always been impressed with Batman’s physique. Ask me to choose between building up my body like Batman or Superman, and I would choose the Dark Knight any time.  There is just something about the wide shoulders, tapered waist and muscular arms and legs of the Batman that shouts “brute strength” to me.

In my opinion, Christian Bale and Ben Affleck had bodies that were the closest to the Batman physique that possibly every Batman fanatic is familiar with and has admired.  Weighing 121 lbs. for a previous movie, Christian Bale went through a rigorous exercise routine to come away with 190 lbs. just in time for his audition in “Batman Begin.”  On the other hand, Ben Affleck went through more than 500 workouts to make his 222-pound frame all muscle.  Thanks to trainer Walter Norton Jr., Ben Affleck is the buffest Batman yet.

So, what does it take to have the Batman body?  I have been asking that question since after watching “Batman vs. Superman” and some of you have probably been wondering as well.  In this article, I’ve compiled several workouts that I came across trying to find an answer to my Batman question.  If you want to have Batman’s body in the hopes of being more appealing to your partner, I am going to ask you to reconsider I’ve tried a few of these routines, and they leave you so tired, I doubt they’ll enhance your sex drive.

These exercises are from interviews with Bale and Affleck where they talk about their preparation for Batman.  I have to say that I only have admiration for these two men, giving all the effort and discipline that they needed to complete these workouts.  If you have low testosterone, you need to know what are the best testosterone boosters on the market. Adjusting your testosterone will improve your mood and makes your body ready to complete these workouts.

​As Affleck’s trainer said in an interview, these workouts are not for the fainthearted.  An error with the equipment or the routine might result to infertility or other sexual problems in men. As with all exercises that calls for equipment or strenuous activity, you should be very careful and do so only with a trainer to assist you.

"For Batman, I had to build muscle.  A lot of it.  I had just finished “The Machinist” and I weighed in at 121 lbs.  For Batman, I had to go up to 230 lbs. within 6 months.  To get the body Chris Nolan wanted I went to the gym six times a week and stayed there for three hours every day with my personal trainer.

Nolan wanted a Dark Knight that was lean, but muscular.  I undertook what they call “Muscle Memory.”  Basically, it’s a workout that helps you build muscle without fat. I used mostly compound exercises to stimulate the most muscle.  I also trained five days a week and did cardio 7 days a week.

​What’s different about this routine is I get to choose the weights.  I had to choose weights that would let me complete the number of reps.  There were three setups or sets.  The first one had me doing four sets of 6, 8, 10 12 reps with only two minutes of rest time between sets.  Setup two was three sets of 10-12 reps with just one minute of rest between sets.  Setup three was two supersets and one drop set and I only rested to catch my breath.

​My workout would not be effective if it wasn’t supplemented by my diet.  I had carbs and protein after my cardio sessions. I usually filled up with rolled oats and green vegetables."

​Before I did my research on the Batman workout, I was in awe with Christian Bale’s Dark Knight.  His body was lean and packed with power.  After discovering what he had to do to achieve his physique, I have to say that I have no words for the amount of discipline and stamina he had to have to go through those routines.

​Here is a look at Bale’s workout:

​A compound movement is any exercise that make you do more than a single joint movement.  These are usually the squat, bench, deadlift and military press.

​Now, let’s talk about Ben Affleck’s interpretation of the Dark Knight.  I think he is the tallest Batman to date.  That height with all that muscles results to a very imposing Dark Knight, which he depicted very convincingly in “Batman v. Superman.”  Trainer Norton explained that they wanted Affleck to have a body like a heavyweight MMA fighter.  They wanted him to be muscular, but agile.  If you want to be the buffest Batman ever, check out Affleck’s workout below.

​"For this Batman, I had to be someone that could literally make the other guy fly whenever I punch him.  That’s how powerful they wanted me to be.  My trainer had me complete 500 routines during my training and they varied a lot.  I had to train for about fifteen months before filming.  I was also shooting another movie that time so you can imagine how hard that was.

​My trainer prepared two kinds of workouts for me for Batman.  I woke up at four in the morning to do cardio and then had my weight lifting session after shoots.  I had circuit workouts, strength training, activation and of course warm-ups. The perfect combination of exercises not only to improve power and muscle, but also to promote longevity.

​I worked with the elliptical and soft foam roll for about thirty minutes as a warmup.  Other times, I would do rowing and foam rolling.  Then came the hard part.  I had two sets of activation workouts.  I would do off-bench oblique holds, split squat iso-hold, seated row, planks, squats with rope.  I had to do two to four sets of each exercise and ten to fifteen reps, depending on what exercise I was doing.  For instance, the squat with the rope, I had to do 8, 10, 12, 15 reps.  But, for the plank I just had to do four sets of ten seconds.

​Other days, I would have alternate hanging knee-ups, dumbbell curls, pallof press, hipe bridge, band pull-apart and one-arm triceps pushdowns for my activation routine.  Then, there were the strength workouts.

I would make dumbbell hammer curls, valslide body slide, dumbbell shrugs, dumbbell floor press, and stability ball leg curls.  I also did the Swiss ball back bridge where you put your legs on a ball while flat on your back.  Then, you lift your hips up and squeeze your glutes.

One thing that my trainer was always telling me was to keep my core tight.  That was no joke.  As if each and every workout wasn’t hard enough, I had to make sure to suck it in and be tense around my abs.

​I also learned to do the hammer curl properly.  I wasn’t retracting my shoulders and letting my elbows come forward when I needed to.  Supposedly, you retract your shoulder, flex your triceps, slowly bring the weight up, and let your elbows come forward a bit."

​So, do you still consider getting the Batman bod?  It sounds pretty exhausting, doesn’t it? Well, it doesn’t only sound exhausting, but it is very draining.  Believe me, I was worn out and I had not even completed one-third of the workouts when I tried each of them.

​Here is a table of Affleck’s workout for two days.   This isn’t everything because, if you remember, Affleck did 500 routines, according to his trainer.

Getting Batman’s body takes a lot of patience and dedication.  Unless you’re an actor with a lot of time and money to spend in the gym and on a personal trainer, then you might consider going on a “summarized” version of Bale and Affleck’s routines.  Just up the intensity and the frequency based on how built you want to look.

Below are some of the exercises that can give you the Dark Knight’s body, but with less of the stress. Remember that, even though exercising is good for you and your physique, too much can be very bad for you as well  so taking on a smaller version of these intense workouts might just do the trick for you without overworking yourself. 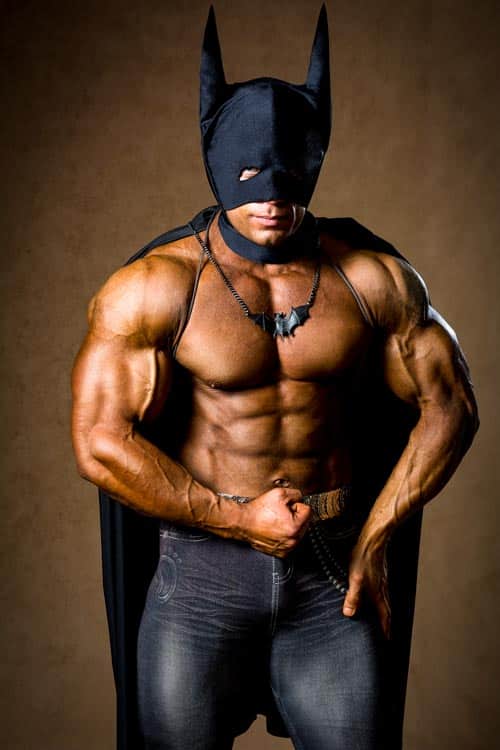 ​Batman’s workouts were designed to make Batman strong because he didn’t have super powers.  If you want to have the Dark Knight’s strength, do the following exercises:

Do four sets of eight reps.  Put 60% of the1RM on a bar, squat, and then thrust the hips forward so you can bring the bar up fast.

For this exercise, let a bar hang at your shin, drop into a quarter squat, and push up and pull the said bar above your head.  Go lower and then repeat.  Do four sets of eight reps.

As the name denotes, use a towel and drape it over the pull-up bar.  Then grab the ends and pull up until your chest is on top of the bar.  Do four sets until you can’t anymore.

You’ll need a kettlebell for this workout.  Hold the kettlebell straight on top of you and curl your right knee.  Push up to your left and drive yourself in to standing position.  And then breathe, then do the opposite movement.

You’ll need three sets of ten counts on both sides.  The wedge an tip of the barbell in the corner, and stand with weighted tip on the front of the chest.  Move it up, while abs kept locked.

Stand with your arms slightly bent.  Put your feet away from the tire, but your chest up against it.  Make sure that your back is flat and your hips are low.  Lockdown the upper part of your body and drive your legs to extend your hips, knees, and ankles.  Start with five sets of two reps, and rest for a minute after each set.

Focus on squeezing the muscles at the bottom part of the movement and don’t let your elbow go past 90 degrees as you go up.

Many of us measure a healthy body by how fit our physique is.  Usually, this means a fit body with muscles and washboard abs.  Batman’s workout is an example of how much it takes to have that dreamed fit physique.  Getting this body comes with a price since, as you have read above, Christian Bale and Ben Affleck didn’t get their Batman bod just by lifting several weights a few times a day.  It takes a lot of determination and discipline to look like the Dark Knight. Your testosterone level must be monitored before starting to implement these workouts in your routine, improving your testosterone level can act as erectile dysfunction's natural treatment and could also increase sperm volume.

​This is Brian Adam, I am a Health Writer, Researcher, and Advisor with a passion for Men’s Health and Wellness, places a strong emphasis on Diet as well, believing that the Combination of Exercise, a Healthy Diet, and a Positive Mindset is the best way to achieve one's Full Potential. I write on most of the topics related to Healthcare, Men’s Health, Women’s Health, etc. Each and every piece of content I produce is completely researched. Love content creation basically; however, I'm excellent at it when it comes down to the health care community. Say Hi to Brian on Twitter & Facebook.