Topical azelaic acid hair loss solutions have been proven to work on patients with extreme forms of alopecia. With this in mind, it makes sense that azelaic acid would be a popular choice for male pattern baldness.

Male pattern baldness, or male androgenetic alopecia, is the most common form of hair loss among men, especially those who’ve reached their 50s.

However, the number of people with male pattern baldness has increased over time—with a 10% per-decade increase among suffers still in their 20s or 30s. This has also caused a huge boost in the sales of hair loss products.

But how does azelaic acid cream or gel help in reducing baldness?

The most interesting part about this acid is the fact that, on a molecular level, it inhibits 5α-reductase, an enzyme which is involved in androgen conversion.

What Is Azelaic Acid?

It has antibacterial and antimicrobial benefits. And that’s why it can be used to address mild and moderate acne problems and to prevent hyperkeratosis, or the overproduction of skin that causes calluses and warts.

You have to take note of why it’s important that azelaic acid inhibits 5α-reductase and dihydrotestosterone (DHT) on the scalp.

5α-reductase is an enzyme that converts testosterone into dihydrotestosterone or DHT, a much more potent androgen. While DHT in itself isn’t necessarily bad, having too much of it can cause:

Of course, you have to look into other factors such as your testosterone levels and how sensitive your body is to androgen.

5α-reductase and DHT were discovered in the 1950s and 1960s respectively. It wasn’t until their side effects were revealed in the 1980s that modern medicine decided to look into potential inhibitors. 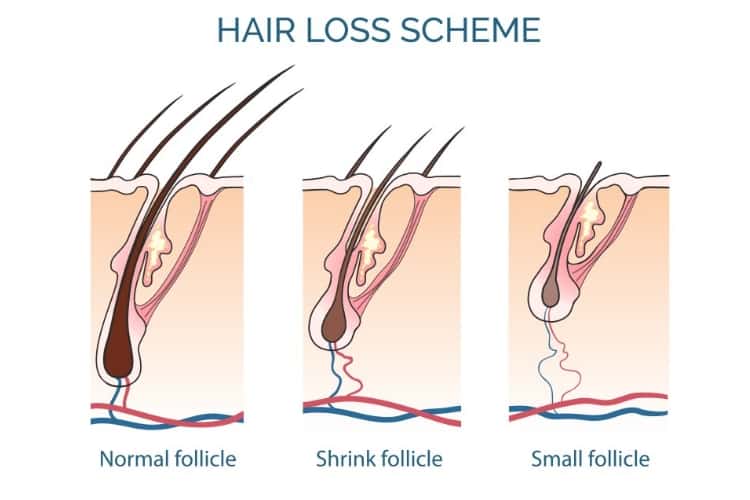 What is clear from a lot of literature is that azelaic acid gel works very differently from the conventional zinc sulfate that’s also prescribed as an inhibitor against androgen and 5α-reductase.

The widely known in-vitro study that compared zinc sulphate to azelaic acid topical solution revealed that the vitamin B involved in helping zinc sulfate inhibit 5α-reductase was not involved in azelaic acid’s mechanisms.

This study that compared azelaic acid topical treatment to anthralin found that the former was even more effective than the latter in addressing hair loss or allowing hair re-growth.

Of course, there are other solutions to shrinking hair follicles with effects similar to those of azaleic acid (which, by the way, is sold under the brand names Skinoren Cream and Aziderm Cream).

These include finasteride andoctadecenedioic acid. Though some use salicylic acid for regrowing hair, it doesn’t really function at the molecular level—limiting its usefulness in issues not caused by oiliness in the scalp.

While all of the studies above indicate that azelaic acid can inhibit 5α-reductase and DHT, thus preventing hair loss, it’s also important to keep in mind that more trials are still necessary.

Plus, a lot of hair loss products that have azelaic acid in them aren’t FDA approved. So far though, the side effects of azelaic acid are rare, and they mostly involve itchiness and redness.

Another point to consider is that azelaic acid may be effective in combination with a topical minoxidil solution. The main difference between the two, however, is that minoxidil doesn’t work on the front of the scalp.

Also, note that hair loss comes in many forms. If you’ve been taking tretinoin (retinoic acid), it’s possible that what you’re experiencing isn’t hereditary hair loss—you could be suffering a side effect of the drug.

While it’s comparable to other substances used in treating hair loss, more trials are needed to truly understand azelaic acid’s effectiveness. That doesn’t make it bad though.

Like we mentioned before, there have been studies that prove that azelaic acid works on patients with alopecia. Still, do consider whether you’ll be combining it with minoxidil or taking it as is.

You can look here for minoxidil shampoo options to get started. If you’re still unsure as to whether or not an azelaic acid hair loss solution is for you, consult a doctor or check other options.

Azelaic Acid for Hair Loss: Does This Solution Really Work?