What exactly can you get out of pumpkin seed oil & hair loss? Particularly, hair loss, the kind brought by Androgenetic Alopecia, may be effectively reduced by using this all-natural oil. At least, that's what a 2014 study showed on its effect on hair growth.

What Is Androgenetic Alopecia?

AGA or androgenetic alopecia is also called male pattern baldness. It affects about 50 million men. That is in the US alone.

Hair loss typically starts at the temples. As hair loss progresses, it affects the crown and eventually, there's total baldness.

People living with this problem have a genetic predisposition to the condition. Another cause is an excess amount of DHT in the body.

What's Up With DHT?

DHT refers to dihydrotestosterone, a byproduct of testosterone – the male hormone. DHT is an androgen-linked to pattern baldness when present in excessive amounts.

How Does DHT Cause Hair Loss?​

When hair becomes old, it falls off. So, if the standard lifespan of hair is 2 to 7 years, it becomes significantly reduced. Typically, hair gets old and naturally falls off at the end of its normal growth cycle. But because of DHT in the hair follicles, hair would fall off sooner. Hair count is considerably decreased on a daily basis.

​Another thing is that the presence of DHT in the hair follicle would have slowed hair growth renewal. To summarize, DHT attached to the hair follicles would mean faster ageing of hair strands, leading to accelerated hair loss. Replacement of fallen hair is slowed until it eventually stops in growing new hair.

The drugs that are typically used in treating AGA or male pattern baldness are minoxidil and finasteride.

Minoxidil is a topical drug meant to stimulate hair follicle activities. It is often available as shampoo or as an active ingredient in hair loss shampoos.​

Finasteride is a pill that directly acts on DHT in the body. Finasteride is slightly more efficient at reversing hair loss than minoxidil.

The effects of these substances are minimal at best – and there is an even bigger issue. There could be adverse side effects from the use of these drugs. They are also quite expensive.​

Why Stay Away From Finasteride and Similar Drugs?

Finasteride, Minoxidil, and similar drugs are effective in preventing hair loss. These have earned FDA approval for this purpose. The actions are focused on controlling DHT.

Finasteride, for instance, inhibits 5-alpha reductase enzyme. This blocks the conversion of free testosterone in the blood into DHT.

Combining minoxidil and finasteride produces greater effects. However, doing so will also increase the risk of adverse side effects.

Finasteride users run the risk of experiencing long-term side effects. One primary concern is the development of post finasteride syndrome (PFS) characterised by decreased or loss of libido, depression, penile shrinkage, panic attacks, muscle atrophy, and erectile dysfunction, among others. These side effects may even become permanent.

The adverse side effects may affect neurochemical balance and functions in the body. Sexual dysfunction may also occur. These may cause some serious problems, more serious than hair loss.

​Another issue is that these drugs may be too active. DHT is not all bad. The body still needs a small amount to keep things in balance. Too much would lead to problems like hair loss. Too low and problems would also occur.

It is vital to check DHT levels in the body before, during, and after treatment with these drugs. Monitoring can help reduce the possibility and the severity of side effects.

For those who do not want these risks, there is a natural way to control DHT and treat hair loss.​ What Is Pumpkin Seed Oil?

This is the natural oil extracted from toasted, hulled seeds of pumpkin (Cucurbita pepo). The extraction method used is cold press expeller.

The oil has a nutty flavour and aroma. It is rich in essential fatty acid, antioxidants, and minerals, among many other nutrients.

There are many advantages of using this precious oil, and the best is probably its potent antioxidant properties. It is also anti-diabetic, anti-inflammatory, and antimicrobial.

What Is the Major Benefits of Pumpkin Seed Oil?

It has an important mineral content, containing significant amounts of iron and zinc.

It also exhibited some protective and preventive benefits against certain types of cancer. Lignin present in the oil showed potential in treating prostate and breast cancers.

This oil also showed potential in treating BPH. This is due to its lignan, zinc, and phytosterols.​

The oil is obtained from the seed of organically grown pumpkins. The oil is extracted using the cold press method.

This helps preserve as many nutrients as possible for excellent benefits.

This oil contains the following nutrients: 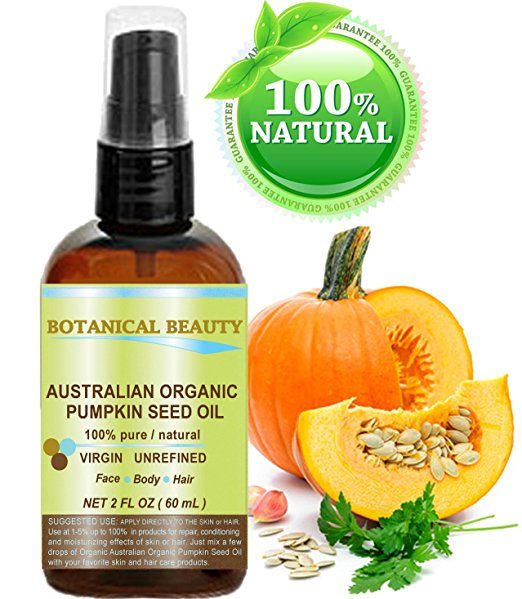 Other nutrients that support skin and hair health include:

All these help in rejuvenating the skin. It helps restore good health to dry skin, acne-prone skin, and oily skin.

How Will This Help With Hair Loss?​

The nutrients help nourish the skin. These have rejuvenating, healing and balancing properties. These promote cellular renewal and healthy skin structures.

Hair is part of the skin. The well-nourished skin would mean more vigorous hair growth. The hair follicles embedded within the dermal skin layer will be better nourished as well, leading to stronger, and thicker hair growth.

Hair growth will also be faster because of the supportive functions and boosting the effect of pumpkin seed oil in cellular renewal.

You can add a few drops of this oil to your shampoo and conditioner.​ The oil is contained in gel capsules made with veggie capsules. This product is non-GMO, vegan, gluten-free, and organic. Each tablet contains 1,000 mg.

​Swanson Pumpkin Seed Oil may help support prostate health. The nutritional profile is formulated to fit the needs of a mature man. It has a balanced mixture of omega fat, particularly omega-6 and omega-3 fatty acids.

A balanced intake of these essential fatty acids provides nutritive benefits that support the healthier prostate.

What's the Link Between Prostate Health and Hair Loss?​

BPH (benign prostatic hyperplasia or prostate enlargement) and hair loss, particularly male pattern baldness, are both potentially brought about by excessive amounts of DHT in the body. So, in effect, keeping the prostate gland healthy is protecting it from BPH. This will indirectly mean keeping one of its leading causes under control, i.e., keeping DHT levels controlled. This happens in an indirect manner but still effective.

Another means for this pumpkin seed oil to help with hair loss is through nourishment. This oil is rich in vitamins K, B, and E. It also has thiamin, niacin, and riboflavin. Minerals in the oil include iron, calcium, phosphorus, potassium, copper, manganese, magnesium, and zinc. Other nutrients are proteins, fats, and carbohydrates.

The soft gels contain bioavailable pumpkin seed oil. Take 1 to 2 gel capsules per day with a full glass of water. Take this as a dietary supplement.​

How to Use Pumpkin Seed Oil for Hair Loss

The oil should be kept in the dark, cold place to prevent it from becoming rancid.

Pumpkin seed oil for hair loss may be applied directly to the scalp. This method is more beneficial for those with mild hair loss. Check the formulation of the pumpkin seed oil product you are going to use. Some are available as a carrier oil. Some would need to be blended with another carrier oil (e.g., coconut oil, olive oil) before use.

For oils meant for topical use, apply directly to the roots. Massage then cover the head. The oil for topical application is slightly thicker and may colour the scalp.

Leave the oil on overnight. This will allow the oil to penetrate the scalp and nourish the hair follicles.

Repeat hair loss treatment twice a week. Results would be evident after at least two months of continued use.

You may also add a few drops of pumpkin seed oil to shampoos for hair loss. This will help improve the benefits.​

For AGA, pumpkin seed oil is more recommended to be taken orally. This product will act as a natural DHT blocker. Recommended dosages depend on the particular product specification. The current recommendation is taking pumpkin seed oil supplements at 500 to 1,000 mg per day. The best time to take the oil is after meals. This will help with better absorption.

Aside from these, you may also add pumpkin seed oil to your food or drinks. Add a healthy helping of the oil into morning smoothie or coffee. Or, drizzle over salad during lunch.​

Hair loss problem is serious as it can significantly hamper your social life and damage your confidence. It can also be an indication of underlying medical issues. That's why it requires serious treatment.

The good news is that you do not have to deal with nasty side effects just to protect your hair. By using pumpkin seed oil, hair loss can be effectively slowed down, and new hair regrowth is stimulated.​